A Chicano artist collective that was active in Los Angeles during the 70s and 80s. They were instrumental in bringing Chicano Art to the attention of the mainstream art world.

The group originally consisted of Frank Romero, Carlos Almaraz, Roberto de la Rocha, and Gilberto Lujan. A fifth member, Judithe Hernandez joined them after they had started to gain recognition.

Frank Romero’s home in Downtown Los Angeles was a sort of informal meeting place for many local Chicano artists. This is where Los Four met and decided to form a sort of artist group. They would meet and discuss art and politics. Through this process, they would decide on what sort of paintings and murals they would do.

They made history in 1974 when they were invited by the Los Angeles County Museum of Art (LACMA) to showcase their art in their own exhibit. The exhibit titled Los Four: Almaraz, de la Rocha, Lujan, Romero was the first Chicano exhibit to be featured in a mainstream museum. This helped legitimize Chicano art. 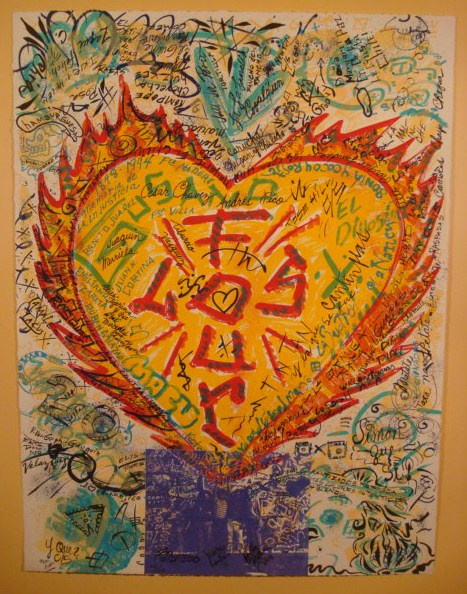 Born in 1941 in Los Angeles, California 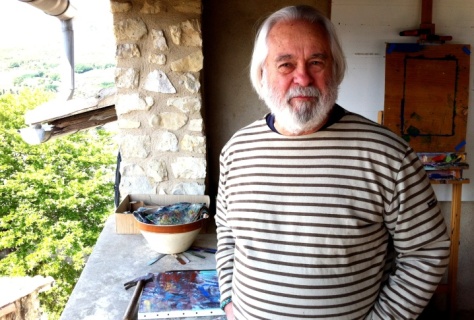 Romero grew up in a culturally mixed middle class neighborhood and was well into his career before he developed a consciousness of being a Latino artist. He attended Cal State Los Angeles and then studied art at the Otis College of Art and Design. Romero, along with the rest of Los Four, began to gain recognition in the art community during the early 70s when the Chicano civil rights movement was at its height. After gaining some recognition, he was hired as the design director of the Los Angeles Community Redevelopment Agency and designed the first section of the Broadway Sidewalk Project.

Throughout his career he completed over 15 major murals throughout Los Angeles, including Going to the Olympics along the 101 Freeway.

He gained fame as a muralist, but now spends his time as a studio artist. 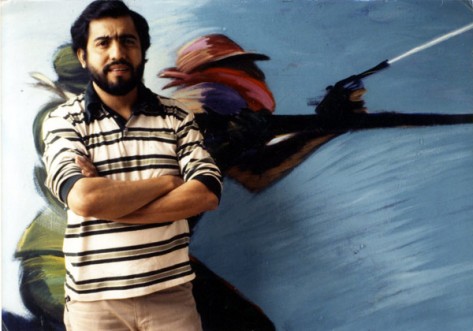 Almaraz was born in Mexico City, but his family moved to Chicago, Illinois, while he was still very young. His family would often visit Mexico City, so it was there where he was first introduced to art. At the Mexico City cathedral there was a painting of John the Baptist that he found “horrifying and absolutely magical”. When Almaraz was 9, his family moved to Los Angeles. He graduated from Garfield High and then attended Los Angeles City College. He then received a full scholarship to Loyola Marymount University, but declined because of their support of the Vietnam War. He chose to attend CSU Los Angeles instead while also taking night classes at the Otis College of Art and Design. It was here where he would eventually meet Judithe Hernandez, the fifth member of Los Four.

After his work with Los Four, he went on to work alongside Cesar Chavez and painted murals and banners in supprt of Chavez’s United Farm Workers.

Some of his most famous paintings were his “Echo Park” series inspired by the park in Los Angeles. 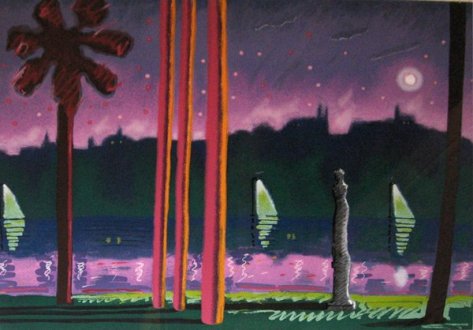 Almaraz was eventually married and had a daughter with Elsa Flores who was a Chicana activist and photographer. Carlos Almaraz died in 1989 of AIDS-related causes.

In 2017, the Los Angeles County Museum of Art will be opening an exhibit dedicated to Almaraz and his art. 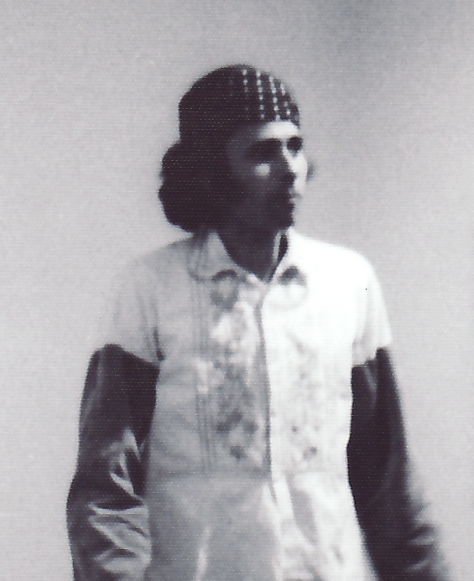 Not much is known about de la Rocha’s early life other than what he mentioned to friends. Some of the things he mentioned was that his parents were Mexican American of Spanish Sephardi Jewish converso origin. He also received a Master’s of Fine Arts from CSU Long Beach. Almaraz describes de la Rocha as a “wonderful artist” and a “very good printmaker”. De la Rocha was very respected for his printmaking. De la Rocha was also described as having a very good background in the arts. He taught art at both CSU Long Beach and CSU Northridge.

In 1973, he was introduced to the other members of Los Four by Gilberto Lujan and they quickly chose to form a group of collective artists. As a part of the group he gained much success and made several murals and art installations throughout Los Angeles. One of his biggest accomplishments was bringing the Mexican tradition of The Day of the Dead to Los Angeles. De la Rocha along with another artist, Gronk, simply decided to celebrate the day by dressing up in traditional skeleton costumes and going up the Evergreen Cemetery. The tradition started off small and was described as “a few weird artists doing this weird thing” but quickly grew in size. Within a few years, Los Four barely had anything to do with it.

Soon after gaining success with Los Four, de la Rocha had a sort of mid-life crisis and decided that he was going to quit everything relating to art. He quit the group and went into a 40 day fast that heavily affected his physical and mental health. He dropped from 145 to 78 pounds. This landed him in the psychiatric ward at the LA County Hospital. After emerging from that, he locked himself away in his father’s home and began destroying all of his art claiming that it had all been created as act from the devil. He lived a secluded life for 20 years until his father died, which prompted him to pick up his art more.

Lujan was born in the San Joaquin Valley to Mexican parents from West Texas. Soon after he was born, they relocated to East Los Angeles where he would spend most of his childhood. He grew up seeing all the civil rights activism and the movement for Chicano rights, so he was a politicized Mexican-American; he identified as Chicano.

Lujan served in the Air Force for 3 years and then moved back to Los Angeles where he attended East Los Angeles College and CSU Long Beach where he earned a Bachelor’s in Ceramic Sculpture. He then went on to UC Irvine where he earned a Master’s in Fine Arts in Sculpture in 1973. By this time, the Chicano Movement was well underway which greatly influenced his art. He began to organize exhibits to showcase Chicano Art. In 1969 he was invited to become an art director for Con Safos, an East LA art journal. Through this job, he met many like-minded artists and eventually formed Los Four.

From 1976-1980, Lujan taught at Fresno City College’s La Raza Studies department. In 2005 he accepted a position as an art professor at Pomona College.

In 1965, Hernandez was the first student to win the “Future Masters Scholarship” which allowed her to attend the Otis College of Art and Design. In 1972, she earned her Bachelor in Fine Arts from Otis and then enrolled for graduate studies there. It was there where she met Carlos Almaraz and became involved in the Chicano civil-rights movement and eventually joined Los Four. During this time, she was also the illustrator for the Aztlan Journal and was the illustrator for the first volume of poetry by the celebrated Mexican-American poet Alurista.

She worked with the United Farm Workers movement and also worked to bring together Chicano artists. In 1981, she and seven other Chicano muralists painted murals inside the Craft and Folk Art Museum for the Murals of Aztlan exhibition.

In 2013, she was one of 72 artists selected for the first major Latino art exhibition at the Smithsonian American Art Museum.

Her art is described as incorporating indigenous imagery and the social-political tension of gender roles.

A Site Dedicated to Latin@ Mural Art and Artists